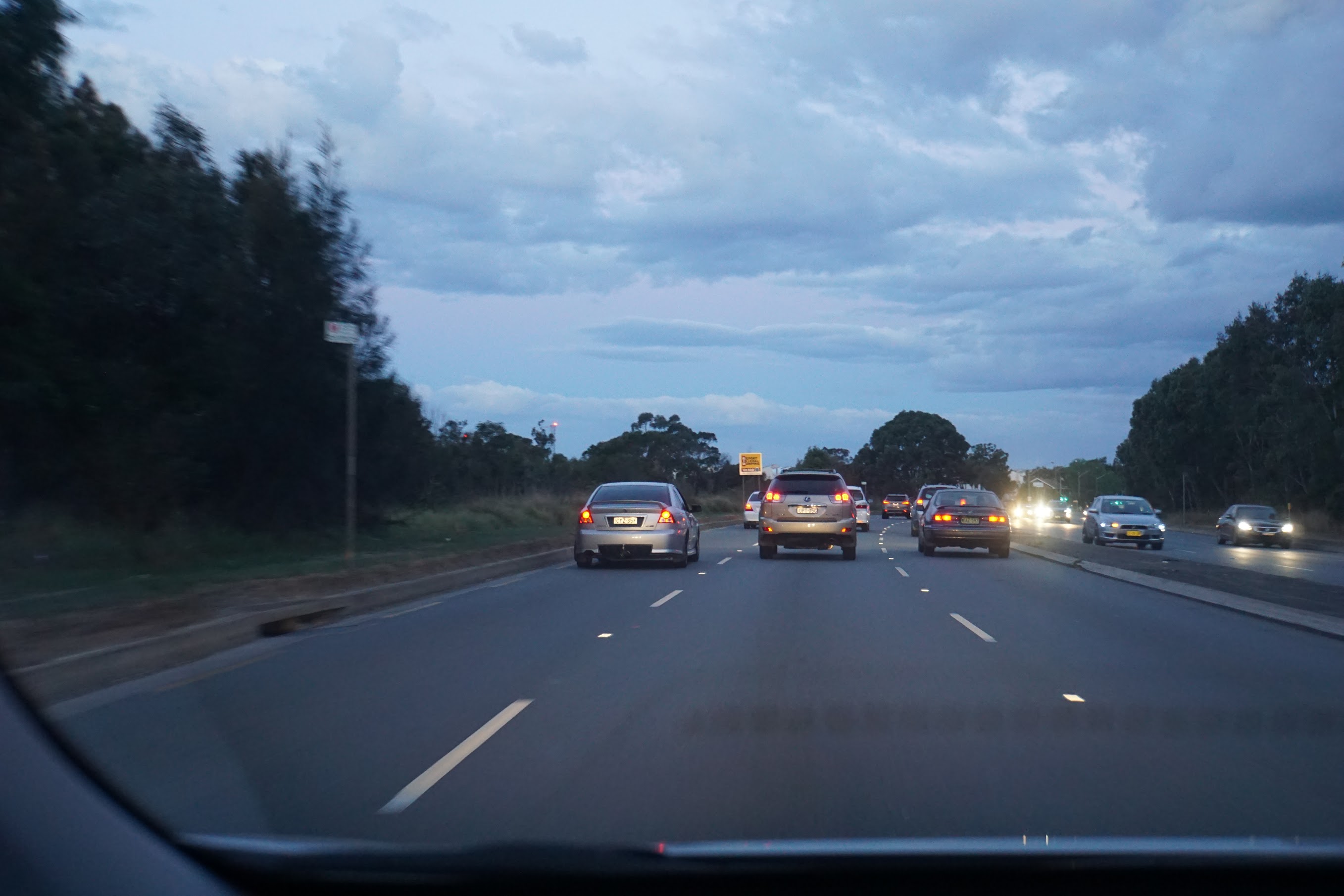 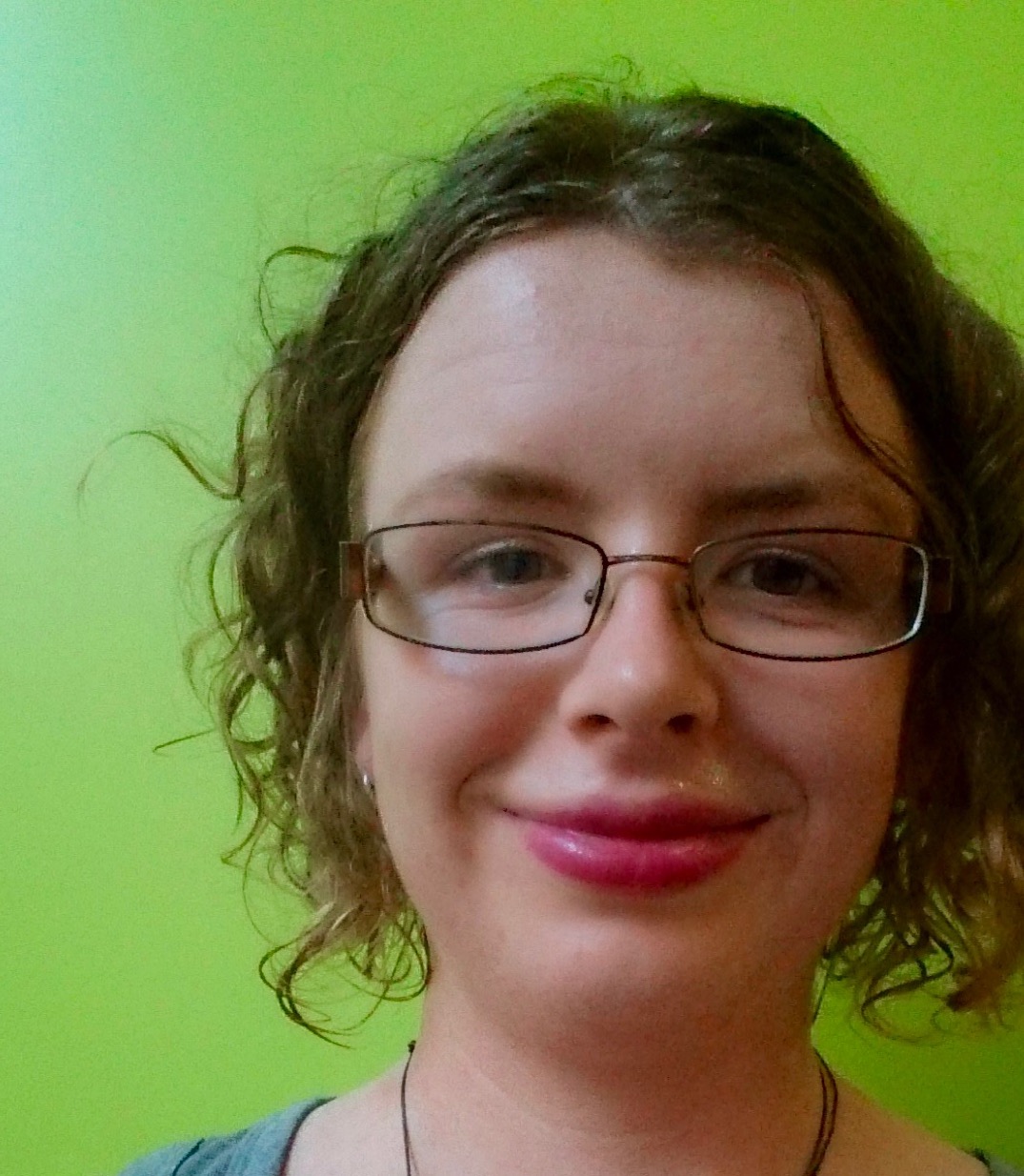 I’m a Data Scientist based in Sydney, Australia. Day to day I work out why solar panels aren’t working. My side projects are not always coding - some crochet, knitting and sewing comes into it as well.

So I went down a fairly windy road to find out. Sure, there are articles out there that list the common streets in Australia, but where is the fun in that?

When I started this project the Geocoded National Address File (G-NAF) wasn’t yet available. I can’t exactly remember what other sources of data I was looked at, but Open Street MAP (OSM) was the easiest to get hold of, so I used that. It also had the benefit that if I ever wanted to do this analysis on any other country the data would be available.

To start off with, I am just considering Sydney - Australia is just too big. It is much quicker to test ideas on a small subset of Australia. And I live in Sydney and am familar with the streets. I should be able to notice any problems with my modelling.

I got the data from Metro Extracts which is sadly shutting down at the end of January 2018. The geojson download gives you a folder of different files already divided up by map feature.

First I need to read in the data. To do this I’m using geopandas, as it can handle the geometry data - the longitude and latitude. As a first round of basic cleaning I’m removing all streets that do not have a defined name and then changing the street name to all lower case.

This is what the data we get from Metro Extracts looks like: 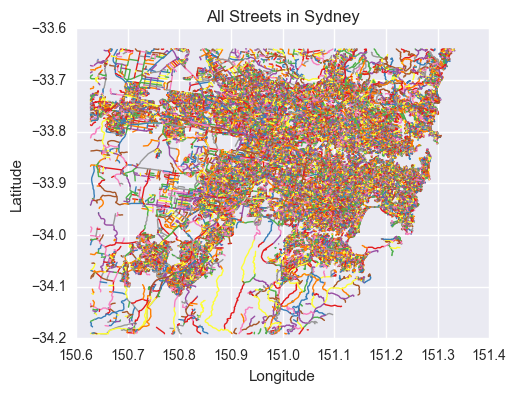 I like that you can identify the Royal National Park (the empty patch in the bottom middle), Botany Bay (to the right of the National Park) and even the Harbour Bridge (the first crossing of the harbour north of Botany Bay).

In OSM, a lot more than just streets are included.

There are three classes highway, railway and man-made. The railway class includes rail lines (both goods and passenger) and light rail lines (used and disused). These are not streets. 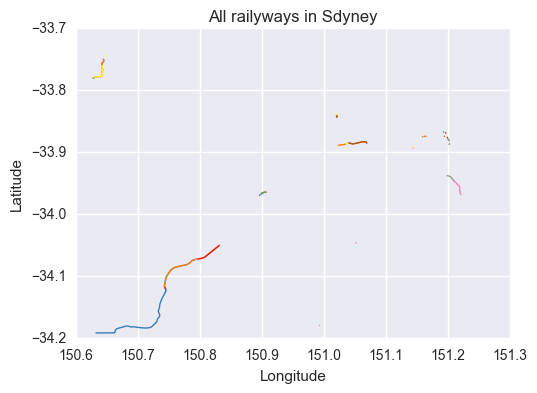 Let’s look at the man-made class. This contains things such as the Fish Market, Taronga Zoo Ferry Wharf, piers and groynes (low walls built out to sea to stop errosion). Also not what I would call streets. 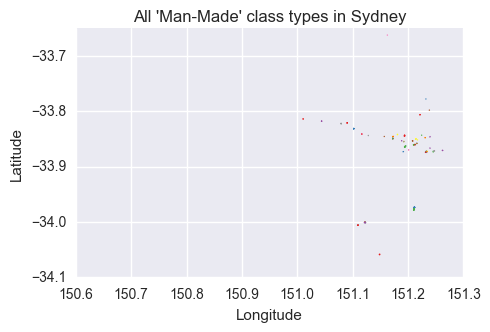 This leaves us with the highway class which contains actual streets, but also includes other things like footways and cycleways which are not streets. All of this information is contained in the type attribute. For a complete list of highway types and explanations on what they are, have a look at the OSM wiki

The highway types we see in Sydney include:

At this point I need to decide “What is a street?”. Where do I draw the line between footway (pedestrains only), living_street (pedestrians have priority), cycleway (bikes allowed) or secondary_link (a road joining a motorway and another street)?

I want to be as incusive as possible with this definition. Motorways should be included as they have names, such as the Hume Highway (some have less interesting names like the M5 Motorway). I feel that link roads should be included as they are also mostly named. Although there are also ones named ‘Westlink M7 onramp’, there shouldn’t be so many of them that Westlink M7 is a contender for the most common street name.

I have decided a street is something I’m allowed to drive a car on. This means I will remove the pedestrian and non-car orientated streets. It also means I will remove private streets or those without public access, such as those at Holsworthy Barracks.

I want to keep as many streets as possible, but also keep it to roads that are public, thus I’m not including no access roads, military roads and HGV (Heavy Goods Vehicle) roads are not real streets.

Note that ‘None’ just means that no access conditions have been recorded.

Finally, there is service attribute. This provides additional context on what the road is used for. There are a few services I want to exclude. Namely, driveway, private_road, bicycle_training_track, go-kart, drive-through (bye KFC drive-through) as they are not public roads I can drive on. I’ve kept parking_aisle as I am driving on it before and after parking.

All of this processing removes just 3,268 streets out of the original 72,798 streets.

To save the file you need to use the geopandas function to_file. This has the unfortunate side effect of making the working file much bigger - 55MB compared to 9MB for the original download.

This is all for cleaning up OSM street data. Next we will do some exploration on Sydney and other adjustments that need to be done.

You May Also Enjoy

Fifth day of Advent of Code, with another ops-code problem.